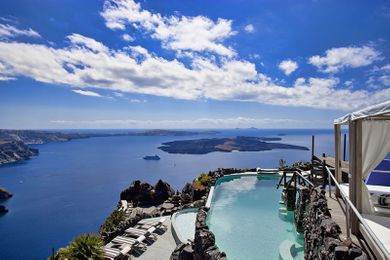 Honeymoon Petra Villas is owned and run by a local family. One of the things that make Honeymoon Petra Villas a hotel unique in its kind, other than its amazing location on the Caldera cliff in Santorini, is the story behind its construction and the personal philosophy behind its hospitality.In 1972, Yiannis Renieris, the head of the local family running the hotel, left Santorini to work on cargo-ships, with an ultimate goal in mind: he planned to reconstruct the village of Imerovigli, which had been destroyed and abandoned after the earthquake of 1956.When he came back, after 10 years at sea and having been round the world three times, he started working on this goal by repairing his parents' house, the one he was born in, which became the first "room to let" in Imerovigli and the first of what would later become the Traditional Wing of the hotel.This, however, wasn't enough: ­with the help of geologists from Switzerland and a team of top-end architects, he started the big effort of creating a new hotel wing, stunning and uniquely worked into the cliff of the Caldera and in harmony with the landscape of Santorini. The Petra Wing was built right on the place where he used to spend most of his time as a child, and was completed over a period of 20 years, during which, every room was created with the combined work of 55 people digging by hand into the volcanic stone.This deeply personal bond with the place is apparent to every guest. Yiannis and his staff is proud to give you a heartfelt welcome in the Honeymoon Petra Villas; a hotel that is the result of many years of concentrated effort, and a stunning proof of his special love for Santorini and for the Caldera. The personal philosophy of warmth and hospitality is shared by everyone here. Honeymoon Petra Villas is like a home to us, and we guarantee that after your stay here, that is what it will feel like to you, as well.

Our property operates from 1 May to 31 Oct.